In this chapter we will explore how the spectral line associated with once ionized Magnesium (Mg II) behaves during a solar flare. To do this, we will make use of one of the most celebrated classical machine learning algorithms known as the k-means algorithm, to conjointly analyze slit-jaw images (SJI) and spectra collected by the Interface Region Imaging Spectrograph (IRIS).

This chapter draws heavily on the functionality provided by IRISreader, a library constructed for the purposes of supporting machine learning exploration on data collected by IRIS. The contents presented in this chapter are hosted on Github and are reflections of the publication Panos et al, 2018, ApJ, 806, 14 . 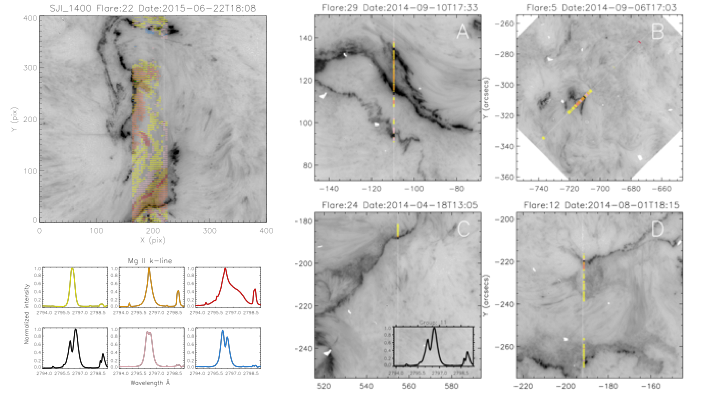 Figure 1 — Example of k-means applied to several different flares. The emergent spectra are color coded in accordance to which group (lower left panel) they are most similar to.

In this section, we discuss some basic physics and instrumentation surrounding the main data types generated by the IRIS satellite. We focus our study on a particularly informative spectral line, the resonant k-line of once ionized magnesium, and conclude with the posing of two simple but vital questions that we wish to address with the help of machine learning.

What does our instrument see?¶

The majority of data for this chapter is from NASA’s Interface Region Imaging Spectrograph (IRIS) small explorer spacecraft \cite{IRIS}, which is equipped with both a spectrograph and a slit-jaw imager (SJI). The spectrograph monitors several important ions emitting in the ultraviolet, while the imager provides simultaneous high resolution contextual images of the solar atmosphere in three different passbands spanning the NUV and FUV wavelengths. IRIS includes a variety of observational modes to serve the particular research requirements, however, this makes big data analysis a challenging endeavor, since the data is highly heterogeneous. An example of the two data types, images in different passbands and spectra, can be seen in the proceeding two plots:

Figure 2 - SJI’s of the same observation in three different passbands.

We can observe different heights in the solar atmosphere by restricting the band of wavelengths our instrument collects. The abundance and opacity of each atomic transition maps out a noisy “surface of last scattering”, where a large proportion of photons can escape the solar atmosphere to form an image on our instruments. For instance, at optical depth unity, \(e^{-1}\) photons slip through the atmosphere without incurring any scattering events. Additionally, the steep and rich temperature structure of the solar atmosphere allows atoms to access transitions involving lower principal quantum number due to increased ionization levels at higher altitudes. The complex coupling between hight and wavelength is illustrated in the SJI’s, with the \(\sim\) 2832 \(Å\) band scraping the upper photosphere, \(\sim\) 2794 \(Å\) band providing an excellent view of the chromosphere and the \(\sim\) 1400 \(Å\) band being sensitive to plasma of 65000 K, allowing views of the upper chromosphere and glimpses of the lower transition region.

The white strip running down the center of each SJI marks the location of the spectrograph, which allows a small fraction of filtered light to pass onto a grating, where it is split into its finer constituent parts, giving rise to the second data type… spectra.

Figure 3 - Mg II spectra collected from the spectrograph. The right panel is a single slice at a fixed hight along the slit.

Spectral lines are the bread and butter of astronomy, and heliophysics is no exception. The shape of the spectra encodes a vast amount of physical information which can be leveraged by researchers to better understand remote environments such as the solar atmosphere. The above spectra is collected along the slit and shows the two resonant h&k lines of Mg II, which are amongst the strongest lines in the UV solar spectrum. The panel on the right displays a single profile sourced from a fixed y-value along the slit. It is important to realize that we do not have spectral information over the entire SJI. The h&k lines are symmetric apart from a factor of two in their oscillation strengths. Although there is a great deal of information to be gained from their relative positions and intensities \cite{Paper2}, as a first study we consider only the strongest of the two lines, the Mg II k-line.

Why is the Mg II k-line an excellent source of information?¶

The k-line has a formation hight that extends over the entire chromosphere as well as extensively damped wings which follow the temperature structure of the upper photosphere. The 2v and 2r peaks are formed in the mid-chromosphere, with line core photons at k3 originating from an altitude just below the transition region. The large opacities of the resonant line implies a small geometrical thermalization length, and hence high sensitivity to temperature, density and velocity gradients \cite{sensitivity}. Because of these attributes, studying this particular resonant line seems like a fruitful endeavor.

Forward modeling has provided us with great diagnostic tools for the quiet sun \cite{Paper1}, however, these diagnostics cannot be blindly extrapolated to the vastly different flaring atmosphere. For instance, the clear central reversal at k3 due to the uncoupling of the Plank and source function in the tenuous upper chromosphere is often seen in emission for flares (e.g. \cite{Lucia}).

Figure 4 — An example of the common nomenclature associated with the features of the Mg II resonant h&k lines. We analyze the k-line on the left.

The questions that we would like to answer in this chapter are the following:

In this section, we discuss the mathematics behind the k-means algorithm. We then experiment with k-means on two very different artificial data sets to try and understand how to select the only free parameter in the algorithm, namely, the number of groups \(k\). Finally, we apply the same methods to real life spectral data from an IRIS observation, and infer some properties based on what we have learned from the artificial data sets.

The k-means algorithm \cite{macqueen1967} is a form of vector quantization, where a data set of points/vectors is divided into a specified number of groups, where each group is represented by a prototype or centroid which is the group average. k-means in effect is a sophisticated multidimensional binning technique, where the space of observations is represented by a smaller set of prototypes. In other words, k-means gives us a tractable observation space by providing us with a coarse representation of the original unwieldily space.

The k-means algorithm minimizes the objective function \(\mathcal{L}\) by initiated the centroids in the locations of \(k\) randomly selected data points, and then iterating over a two step procedure known as coordinate decent:

This two step iteration terminates when either the centroids stop updating their location, or the distance between the old and new centroid positions are all below some specified threshold. The clustering depends on the initial random placement of centroids, hence it is customary to repeat the process a number of times ad select the clustering with the lowest total inter cluster distances.

k-means has a time complexity which is effectively linear \cite{kmeans_time}, making it big data scalable, however, it requires the manual selection of the number of groups \(k\). A number of techniques have been proposed to automate the choice of \(k\). We will explore one of the popular methods known as the elbow technique. We provide a fast mini-batch version of the k-means algorithm below, which will be used in this chapter. For the details of this version, we refer the reader to the source code at scikit-learn.

The central question for this algorithm is: how many groups should we partition our data into? For some data sets, there exists a natural number of groups which can be found by monitoring how the inertia behaves when successively increasing the group number. In the shoulder method, the optimal number of groups is given by the point where the inertia drastically decreases and then subsequently undergoes only a gradual improvement with each additional group. This behavior when plotted looks like a shoulder and is where the technique derives its name. Although such a technique is useful for some data sets, it fails for others. We will demonstrate this with two synthetic data sets and then apply the same technique on a real data set containing spectra and compare the results.

Figure 5 - Two very different data sets for exploring a potential method for discerning the number of groups \(k\) to use in the k-means algorithm.

A clear shoulder appears for data set X1, suggesting a natural choice for the number of groups as 5. On the other hand, data set X2 has a less distinguishable shoulder, and hence no clear group number. We will now plot the clustering results from the k-means algorithm with the plotting function below.

Applying k-means to an IRIS observation¶

Although there are two strong resonant Mg II lines in the spectral window, for simplicity we have chosen to focus on just the k-line. To this end, we have to specify a maximum and minimum wavelength in order to partition and extract only the strongest of the two lines. Additionally, we will provide the size of the wavelength grid to interpolate onto.

For this real world application, we have to clean the data in several ways before we can apply the k-means algorithm and the shoulder technique.

To this end, we have provided a number of cleaning functions below. 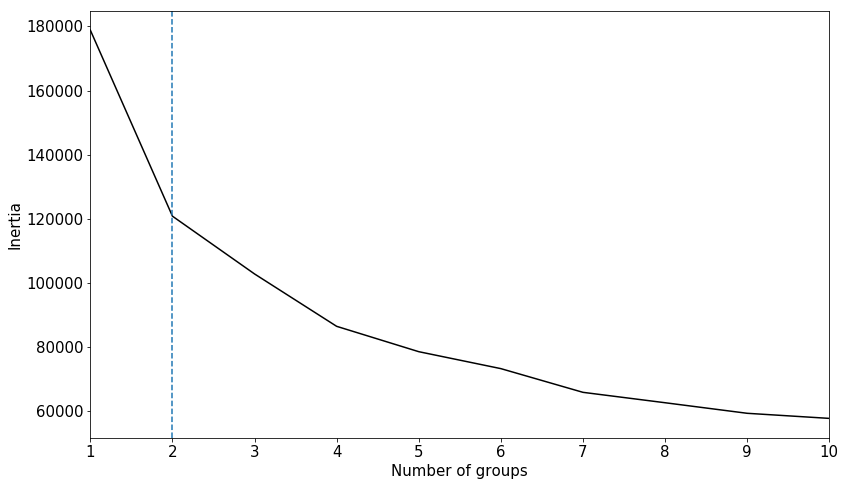 Figure 7 - Inertia v.s. number of groups for a real IRIS spectral data set. There is a clear sholder in the inertia at number of groups = 2, however, this simply devides quiet sun and flaring spectra as seen in Figure 8. 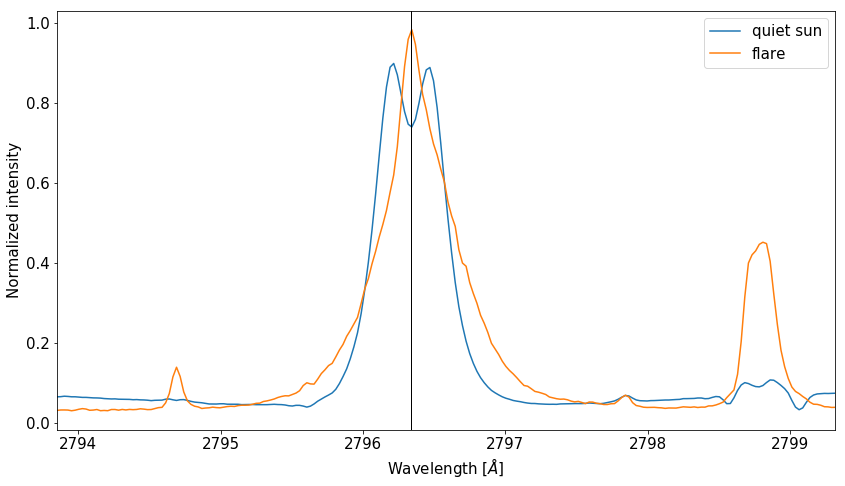 Apart from this separation, setting the number of groups equal to 2 does not offer us enough “information resolution” to study the dynamics of the solar atmosphere. Additionally, the inertia vs. group number plot after \(n=2\) improves excessively slowly with the addition of more groups, implying that our real life spectral data resembles a structureless data set similar to that of X2. It is often the case, and spectral analysis with IRIS is no exception, that the selection of the number of groups to use in k-means can not be automated, and should be left to the discretion of a professional in the field.

3. Application of k-means to IRIS data¶

It appears that we need to reach for an external source of data other that the raw spectra in order to decide how to fix \(k\). In this section, we load three IRIS observations, one quiet sun, and two flaring observations, which we refer to as qs, f1 and f2 respectively. We apply the k-means algorithm to the qs observation and then create what we call a “centroid mask”, indicating in a live SJI animation the group assignments of the emergent spectra. We then take the centroid mask generated for the qs observation and try to apply it to one of the flaring observations. The results indicate the incompatibility of the mask, meaning that the spectra from flaring atmospheres is markably different form those of the quiet sun. In the light of these observations, we create a new mask predicated on one of the flares, and see whether this mask is still compatible with the remaining flare observation. If it is, then we can start drawing conclusions about the possible similarity of chromospheric physics in flaring atmospheres.

We will load our three IRIS observations using the preprocess_obs and extract_flare functions of IRISreader provided in Utils.py. The functions return a plot of the GOES X-ray flux over the green period where the IRIS observations were extracted. In the case of the qs observation, the total integrated soft X-ray flux is below flaring level and stable, in comparison to the flaring observations which indicate regions of high X-ray flux. Animated movies of each observation obtained by interweaving consecutive SJIs together accompany the GOES plots. In addition to this, a link to the Heliophysics Events Knowledgebase (HEK) is provided if the reader requires a more detailed description of the observations. Finally, a small insert of the data, raster and sji shapes are provided.